Episode 018: The Melancholy of the Human Position: Scholar Dr. Dustin Atlas in Conversation About the Work of Martin Buber and The Ephemeralness of Relationship 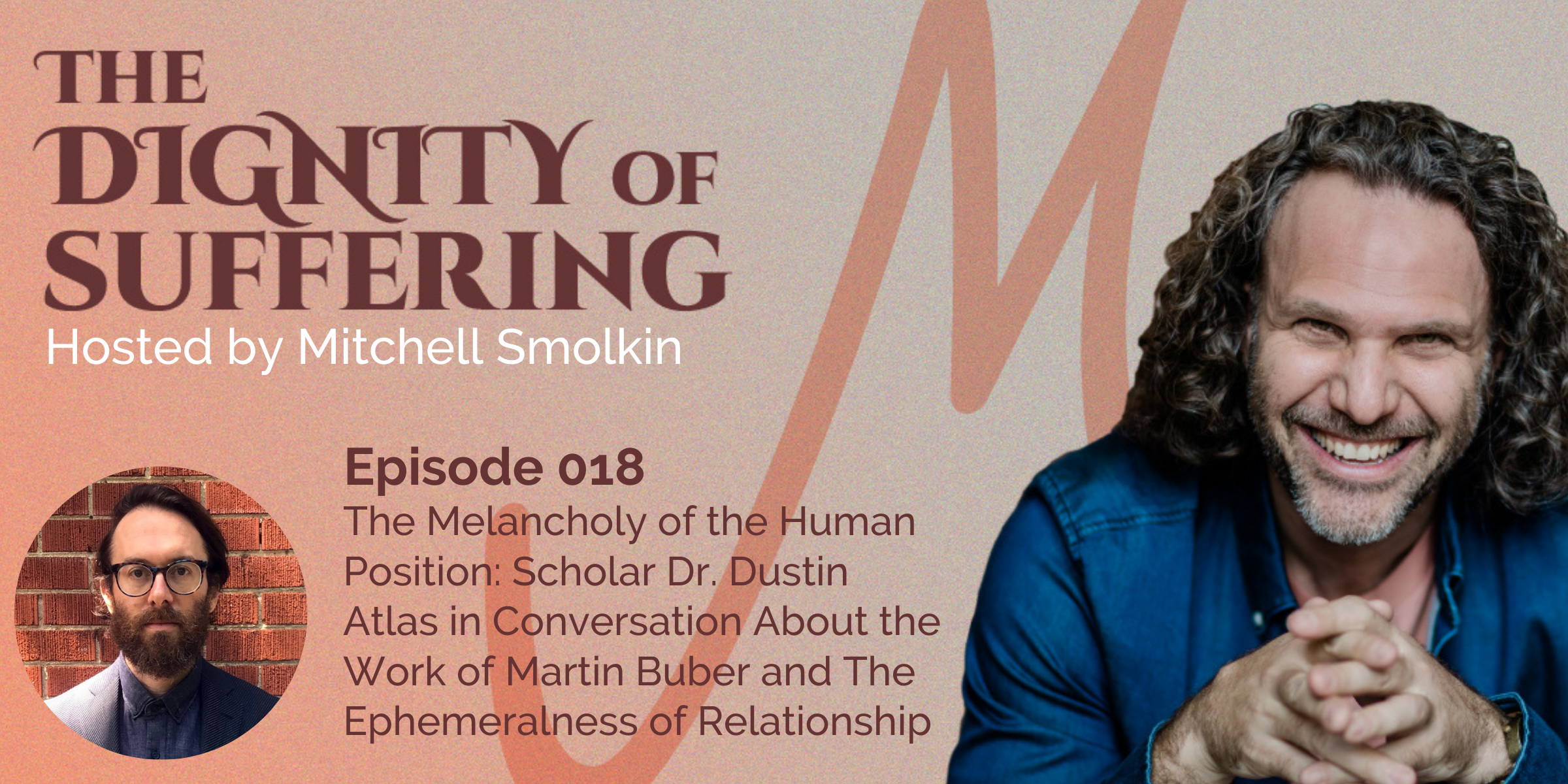 I was once attending a conference in downtown Toronto and the theme of the conference was the entry problem: how do we enter into psychological material? There’s a whole philosophical tradition, most notably at present taken up by a German psychologist and philosopher named Wolfgang Geegref who relies on a way of looking at psychology that postulates that it is basically psychology studying itself.

So when we’re in therapy or we’re thinking about ourselves, it’s a very difficult thing to do. It’s not like looking at an organ, for instance, and assessing what’s wrong and deciding whether to do surgery or take another approach. Psyche studies psyche.

And about halfway through the day at this conference, I had to go move my car and I put the car in the underground parking lot at this hotel. I went to go back upstairs to rejoin the conference and there was a doorway not too far from where I parked. And up the stairs, there was another door that I opened and the door closed behind me. And then I realized that there were no handles on any of the doors in the room that I was in. Actually, there was a window just facing the street. I found myself with all these locked doors with no handles.

Sounds like I’d entered into a psychiatric ward. But no, I somehow had entered a door that I wasn’t supposed to. And the irony wasn’t lost on me that here I was at a conference discussing the entry problem and there was no way for me to enter. I eventually bang so hard on a door a man in a chef’s hat came out. It must have been the rear of the kitchen and I imagine that security fixed the issue after that.

The reason I tell you this story is apropos of my interview today. Dr. Dustin Atlas is the director of Jewish Studies and Assistant Professor in the School of Religion at Queen’s University in Kingston, Ontario, Canada. His current book project, Buber Talks Jewish Dialogue and the Nonhuman World, uses the work of Martin Buber to interrogate contemporary post-human concerns in Jewish thought, politics, and life, exploring the ways in which Jewish thought allows us to engage the nonhuman. I reached out to him because I have only a peripheral knowledge of the philosopher Martin Buber’s work. Martin Buber, who lived from 1878 to 1965, was a prolific author, scholar, literary translator, and political activist whose writings ranged from Jewish mysticism to social philosophy, Biblical Studies, religious finance, rhinology, philosophical anthropology, education, politics, and art.

But most famous among his writings was a short but powerful book entitled I and Thou which he wrote in 1923 where he considered our relations to others as twofold. There was the I-it relation which prevails between subject and objects of thought and action. And there was the I-thou relationship on the other hand which exceeds the subject-object relationship. All to say that Buber, and as you’ll hear Dustin go into great detail in our interview today, was very much concerned with the limitations, challenges, and obstacles informing authentic connection.

And this goes back to the entry problem because this is not something that can be forced or manufactured. This is a notion that pervades much of our lives but also a lot of psychological theory.

In thinking about my preface to my conversation with Dustin today, I wanted to share a kind of moment that I don’t know whether I talk about it very often. I don’t know if I’ve heard many other therapists talk about it. But it’s the moment when somebody first walks in the door for therapy and there’s a kind of unknown that enters the room. Usually, there’s a lot of hunger when somebody finally decides to go to therapy. Usually, there’s a lot that comes with that in terms of expectation. As I publish and produce more, people come in maybe having a sense of who I am, having listened to this podcast, having read my writing. And all of that is in the room.

And, of course, this is who I am. But in that moment, meeting an individual, it isn’t who I am. I’ve never been in that moment before. And, as I’ve maybe talked about previously in this podcast, I also think it’s important to resist certain temptations when it comes to finding answers. And I think that that pervades to a degree the conversation with Dustin today where, at some point, I felt that the two of us were talking about a kind of space to hold the nonspace, the nonbeing.

Later in our chat, he references relationships and references Martin Buber, talking about all of the different revolutions that human beings go through in a long-term intimate relationship. This is something that I face every day in my clinical practice with couples and in my own marriage

where it’s really important. I think that that’s what I really appreciated about Dustin sharing with us his expert knowledge in the work of Martin Buber and others. It’s crucial at least to try to frame the dissolution of moments in time, of ways that we understand ourselves and others, which we need on the one hand to not become psychotic so that we have some kind of predictable, continuous psychic skin and experience.

But also one of the huge challenges existentially is having to mourn the loss of so much of what we experienced as familiar and real. And, understandably, there can be an incredible clinging on to what we have come to know about ourselves and others. And to be honest, I think this is half of what I do as a therapist: sitting with people in mourning the loss of what they imagine themselves, their future, and others to be and tolerating a kind of nonspace, nonbeing that often we have no indication of how long being in that state will last.

I also want to avoid in my preface any kind of reification of these notions. There’s certainly an attempt on my part to share a very private experience as a therapist where there’s a very real part of me in the room trying to connect with someone, especially when we are first meeting, but also a part of me that needs to just observe and wait and listen. And frankly, the older I get, the more I’ve noticed that I’m not only listening to a voice which is not mine and is mind at the same time but also a somatic felt sense of what my body is telling me in the moment. And in other podcasts, maybe I’ll go into some of the great work of people like Allan Schore and Peter Levine who confirm and really shore up the brilliance of those parts of our membrane that allow us to know a certain wisdom. But really I think what pervades my conversation with Dustin is a kind of lament between an attempt at reaching some kind of connection with others, with animals, with inanimate objects, and the necessity to have to wait, withhold, and not cling on to experiences that, ultimately, we experience as true or authentic. Dustin doesn’t mince words with the ideas that he finds very troubling. I often bristle at the notion of authenticity because I don’t really know what it means. We’re never fully authentic. That’s what the discovery of the unconscious, I think, really solidified for us, that we don’t really know often if we’re being true or not being true.

Dustin and I sat together a couple of years ago now in Kingston. I was just getting to know him and he, first of all, let me know that he was a scholar of Martin Buber’s work. And then he added that it wasn’t even so much the conventional notion that a lot of us think of when it comes to Buber and his focus on relationship and really that delineation of relationship, but he brought up the fact that he’s even more interested with his work on relationship with animals and even with things, with objects. And so I wanted to bring Dustin onto the podcast in part because it’s just an interesting area of thought to consider how two people connect and as a therapist I’m constantly oscillating between the fact that I think I’m just making everything up and maybe occasionally I actually connect with somebody. Please enjoy my conversation with Dr. Dustin Atlas.